Friday night we had The Walsh Family Haunted Halloween Party to attend!  This was such a blast!!  We all went in costume and my hubby had the best costume of the night: 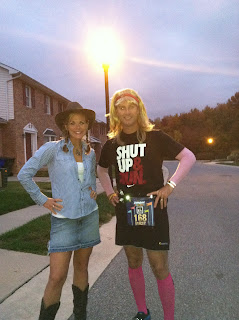 He decided to go as me since we were going to be around a bunch of my running buddies!  He is such a nut and I love him for it!  He even wore my Garmin, BIC band, iFitness belt and Road ID.  I went as a cowgirl...Yeehaw!  They boys decided to be a ghost pirate and skate boarder..they had the best time and did not want to leave at the end of the night.  Here are some of the yummy treats from the party:

And this is just a few pics of what was there but there was soooooo many more delicious treats!  Angel was a Silent Movie Actress and looked awesome: 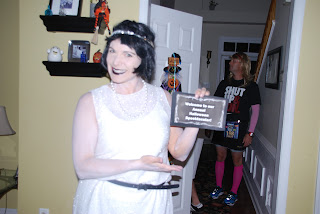 And the Host with the Most: 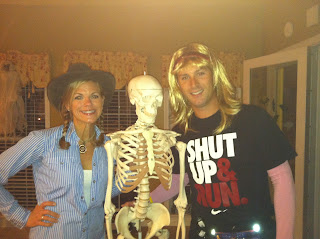 Angel's hubby Greg did the BEST haunted house and really went all out with the decorations throughout their house and yard!!  Greg also had a special treat for me: 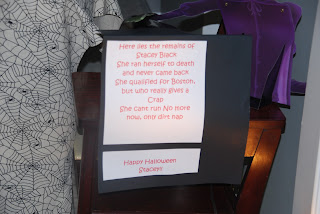 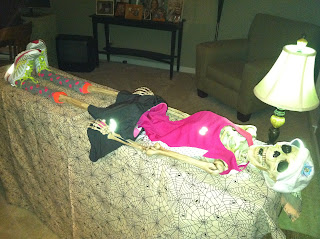 So much fun and I cannot wait for next year.  Angel and I had the NOT so bright idea to meet at 6:30 am to run 13 miles after a late night and a tempo run the day before...Well we started of in a negative mindset and the run just went down hill from there.  We got to mile 4 and stopped to talk to Shara and from that moment on we both called it quits!  We have NEVER quit on a run before and have never had to call for a pick up ride but after much mental struggle we called Greg to pick us up!  On the bright side this did happen: 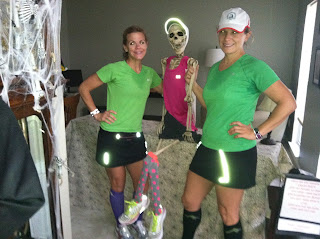 We showed up wearing the EXACT same outfit!!  That is how you know you are running wives!  Lol.  We did end up with 6 miles but even though the run sucked we did have a few good laughs.  We both learned a lesson...1st we are not 20 yrs old anymore and need more rest, 2nd if you do not feel recovered DO NOT risk injury by pushing it, 3rd do not be afraid to cancel if you are not feeling the run!

The boys both had games and Chase did amazing...his team won 50-26!
It is so neat to see my hubby coach these kids and how he is such a positive influence on them!  We tried to enjoy the day outside as much as we could since the next few days are suppose to be awful here!  Hurricane Sandy is coming and she is ruining our plans!  So after hurricane proofing our house/yard I headed do the Ginny's house where we had a girls night and talked running and tri's!  Best conversation, company and chili!  I have such admiration for Ginny and her husband and the dedication they have to triathlons!

Hope everyone in DE stays safe and dry during Sandy!