Friday we switched hotels and moved over to our favorite hotel the Polynesian: 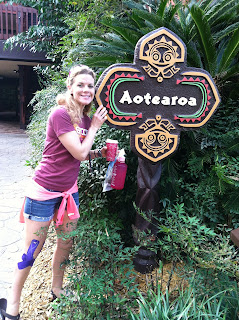 We normally stay Club Level but it was closed for refurbishment so we had a park view room!  Once we checked in we headed out to Epcot for the day and just cruised around the park...We had a nice carb loading lunch at Via Napoli which was AMAZING:
We did not have a single crumb left!
After lunch we walked around a little bit more and did a few rides then went back to hotel and rested since we have to be up by 3 am to head to the race start!

We had the Race Retreat package for the half marathon so we just grabbed a bagel, banana and some coffee in the tent before the race.  This is a extra cost but so worth it...It is a heated/air conditioned tent with private port-a-potties, tons of food and beverages (water, powerade, coke products, tea coffee), a stretching/massage area as well as character photos!  I am so doing this for now on!

There is about a 20 minute walk to the start of the race so after I got fueled up I said bye to Danny and walked to the start!  Well, it was a mess...So So So crowded and took about 35-40 minutes to get to my corral A.
This was just the start of the walk to the corrals!  Apparently they increased the field size and more people showed up this year to run the race.  I had wanted to use the pot again before the start but there were no port-a-potties near corral A so a few girls were popping squats near the trees so I decided to give it a go...Well never again!  There were little prickly things from the brushes that got stuck all in my hair and on my shorts...as well as the other girls also!  This totally freaked me out but I guess that is what I get for squatting in the jungle!
I wore my Team Sparkle red skirt, my red sparkly BIC band and my Running Skirts tank top which I am in love with!!

I couldn't find my pace for the first 4 miles or so because it was so overcrowded and people were running slow!  I decided at this point this is just for fun and not a race...So when I started to see the characters along the way I stopped for a few and got my picture taken.  The crowd support here is also great and so many people are out a cheering us on!  I did see Danny a few times along the way which was awesome!  He snagged a few pics: 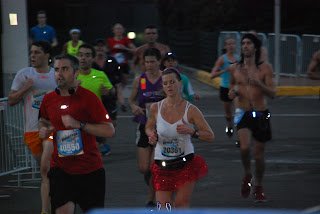 The weather was great..a little warm towards the finish but I will take it over freezing cold weather any day!

My time was not great but will do... 1:40.  So after I finished we went back into the race retreat and Danny ate while I got my massage!  It was the best massage ever.. My girl knew exactly where my tender spots were and really worked on them as well as adjusted my out of place rib!  No wonder it was hard to take a deep breath.  After the massage we hung out, ate, took a few pics then loaded the bus to go back to the hotel.
I went to the pool for a little post race relaxation and sunshine: 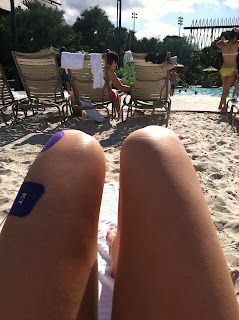 Later we went to Magic Kingdom and did a few rides and had dinner at the Crystal Palace which was delicious and I was quite full and ready for bed when we were done.  Another early morning was ahead for us.  We watched the fireworks then went to bed.  1/3 of the way done the Goofy's Challenge....26.2 to go!